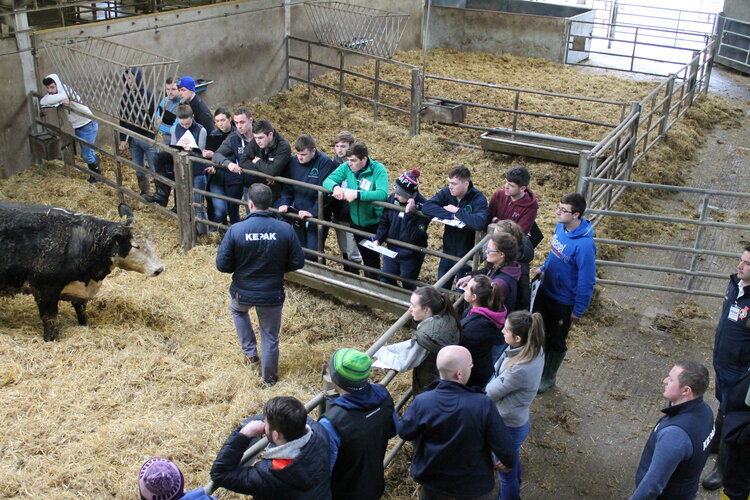 Irish Hereford Prime held a stock judging competition in March of 2019 at Kepak Clonee. There was an awards ceremony on Wednesday, April 10, a few weeks after the judging of the Hereford cross stock at Kepak Clonee.

Michael Cleary of Irish Hereford Prime presented Hugh Larkin from Co. Monaghan with the winner’s trophy, and the runners-up with their prizes. At the awards, Tennyson Egar from Irish Hereford Prime gave a brief presentation on the history, background and bonus schemes offered by the beef producer group. While Larkin took the top prize on the day, the runners-up were said to have “scored closely” in the competition, and prizes were awarded as follows:

Irish Hereford Prime expressed a special thanks to the Kepak Group and to Maria Hester for facilitating the event.

The Irish Hereford Prime stock judging competition was held at the Kepak Group processing plant in Clonee, Co. Meath, on Wednesday, March 6. A total of 44 students from UCD’s School of Agriculture and Food Science participated. According to a statement from Kepak, the students who are currently taking a module in Advanced Beef Production learned first-hand about the safety and biosecurity measures in place at the Kepak site before beginning their tour of the cattle lairage. At the event, Kepak procurement manager, David Coyne, gave students some insight into how to observe and select animals that are fit for slaughter. Coyne used the cattle on hand to compare and contrast them physically on both a fat and conformation grade basis.

The students were tasked with estimating the potential carcass weight, conformation grade and fat score for each of the five Hereford cross cattle on display. Certified Irish Hereford Prime is a farmer-owned beef producer group that sources and certifies Hereford and Hereford cross cattle for its partner processors ABP Ireland and the Kepak Group. With over 4,500 members, Irish Hereford Prime says that it has grown steadily since its establishment in 1997.