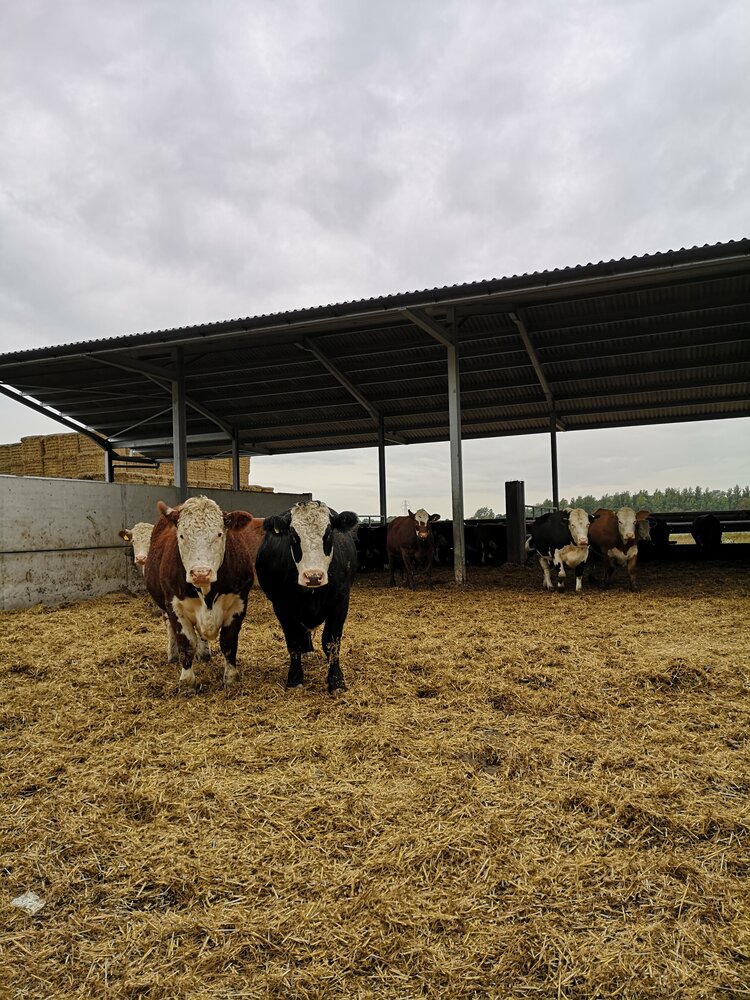 On Thursday the 3rd of October 2019, as a group of forty four Irish Hereford Prime members and Hereford breeders, we departed from Dublin airport to Birmingham, UK for our producer groups first organised agricultural tour.

After arriving in Birmingham, we headed to Hill Farm owned by Richard Mann. He farms in partnership with his wife and two sons. A dairy farm up until 2006, it is now predominantly in grass production with only 50 of the 700 acres growing wheat.

Richard runs a herd of 130 Spring calving pedigree Hereford cows, but the main commercial side of the farm is predominately Hereford cross cattle. He buys Hereford crosses at four months of age and aims to slaughter them between 16 and 24 months old. The 900 head of cattle in the finishing operation are supplied mainly to Dovecote Park (dedicated suppliers to Waitrose) but they also send some cattle to Dunbia.

Richard was happy to provide as much detail on the farm enterprise as he could. We discovered that he is utilising all available resources nearby and has huge access to by-product feeds for the finishing period. He feeds his cattle a ration that contains bread, grass silage, maize, whole crop, liquid molasses and brewers’ grain.

Due to animal welfare standards, slats are not allowed, so Richard beds with straw, compost or woodchip which is all in close proximity to his farm. He supplies his FYM to the arable farmers nearby in return for straw. Finishing pens were not densely stocked and some pens were not fully covered over due to the fact that he farms in a low rainfall area (approx. 600mm)

Day 2 saw us begin with a visit to the Hereford Cattle Society Offices, Known as Hereford House, where we were given a brief outline of the Society and how it is run. It has been the headquarters of the Hereford Cattle Society since it was formed in 1878. We were reminded that the first Herefords came from the UK to Ireland in 1775 to Co. Westmeath. It was noted that membership in the Society has increased by almost 50% over the past 10 years. In that time, the number of Hereford calves born has grown from approximately 6,000 in 2009 to over 9,000 in 2018.  This is definitely strong evidence to suggest that the Hereford breed is outshining a lot of other beef breeds in the UK.

Discussions took place on a large range of interesting topics such as the UK Hereford youth programme; the Society shows and sales; breedplan performance recording and the increasing demand for Hereford beef. Most interestingly, some insight into the future was explored, with issues like maintaining high welfare standards, improving food integrity and SNP (54k) DNA testing being discussed. How best to engage with consumers through open days, social media etc. by telling the story of locally produced grass finished Hereford beef was to the fore.

Our time in Hereford House was followed by a guided Tour of Hereford Cathedral and then some down time to look around Hereford city at our own leisure.

Next on the agenda was a visit to Tony Bradstock of Free Town Herefords. Percy Bradstock began breeding Herefords in 1906, he moved to Free Town in 1919 when a major portion of an estate was sold. The reputation of the herd continued to grow and eventually they began regularly exporting breeding stock around the world, including Australia, South America, South Africa and Ireland. Today, 100 years on, the herd of some 75 breeding females is managed by the fourth Bradstock generation, Tony.  The Free Town herd has in recent years used two bulls from the Moyclare Hereford herd in Ireland.

Current farming practices were outlined to us. It was noted that underperforming cows are rigorously culled, on economic criteria of fertility, milk, feet and calving ease. Stock unsuitable for breeding are finished on farm, surplus bulls are sold at a liveweight of 550-600kg and other prime animals sold to local butchers in Hereford, or privately as boxed beef from farm to local consumers. Winter rations are based on grass silage of short-term ryegrass and red clover ley. Adult cows are not fed concentrates and young cattle are fed a mainly home-grown ration of oats, barley and beans.

Most notably, Tony stated that “With a resurgence of interest in Hereford cattle generated by the various beef schemes, I’m assured that if the breed continues to improve, whilst retaining its versatility and maintaining the maternal qualities which have made it a world-recognised breed I believe the future is bright.”

First up on Day 3 we visited the oldest running Hereford herd in the world, Haven Herefords.  Thomas Lewis started breeding Hereford cattle in 1822. The current Edward Lewis took over the running of the farm from his father Leslie in 1984, becoming the fifth generation of the Lewis family at the Haven Farm. The farm has changed over the years and now has more of a commercial focus. Whilst still continuing to breed Hereford cattle on 100 acres of temporary and permanent grassland, the farm comprises 140 acres of cider apples selling to Westons, C&C and Heineken, with 6.5 acres of traditional fuggle hops supplying Charles Faram Ltd. Also present are 140 acres of mixed arable cropping stewardship schemes.

Ben, the sixth generation Lewis is now farming at the Haven alongside his father after graduating in 2015 and travelling abroad in search of new genetics notably America and Canada (2013), Australia and New Zealand (2017). The herd currently runs 50 cows, which are split into spring and autumn calving so the farm can supply bulls all year round. Sales are made from promotion through farming magazines, by word of mouth and in the show ring.

The herd’s average terminal and self-replacing EBV are now in the top 10% of the breed, which is “very pleasing as more customers now want this, although our policy is that phenotype still comes before EBVs. Having exported cattle to 26 different countries, we like to have bulls (in the form of semen) that can travel the world”. Currently Haven Kingpin, Haven Wizard and Haven Jackal are available for export.  Some of the recent bulls used at the Haven include two bulls from Ireland – Corlismore Ted and F.H. William.

Our final farm on the tour was that of Tony and Babs Norman and family. A substantial farm, 400 acres owned with an additional 700 acres rented. Farming took the form of three very interconnected enterprises. Alongside the Herefords, there is a dairy herd of 600 cows and 250-300 followers, a poultry unit of nearly 200,000 broilers and an anaerobic digester (AD) plant. The waste from the livestock enterprises go to the AD plant. Richard Norman and his brother run the farm now as well as running other dairy units in the local area. Dairying on the farm is from a grass based New Zealand type system supplying milk to Arla. Cross-bred cows calving in the Autumn with 10-30 calves born per day.

The poultry unit has a contract for day old chicks reared to 38 days. The company that supplies the chicks, also supplies the feed. The farm supplies the buildings and labour. The chickens end up in outlets like Nandos, McDonalds, Tesco and Morrisons. To put everything into perspective, eight tonnes of chicks arrive onto farm on Day 1, and almost 400 tonnes of chicken leave 38 days later, a huge turnover by any measure.

The AD plant was the enterprise that caught most of our attention. At a temperature of 38 degrees, billions of bugs are working at their maximum ability to produce methane. The digester has the capability to generate enough electricity to run everything on the farm and up to 700 additional houses. While the methane is also used to heat the chicken houses. Some crops growing on farm feed into the AD, including maize, beet, barley and silage, along with food & veg waste and FYM. However, Richard has learned over time that feeding the AD the optimum combination allows its full potential to be achieved. The waste material from the AD is used as fertiliser for the farm, proving to be more than enough P and K for the 1100 acres on this farm. In fact, it has the ability to provide enough fertiliser for almost another 2,500 acres.

The Norman family brought our agricultural farm visits to a very interesting conclusion. On our final night we enjoyed a gala dinner with many stories told and friendships made. Special thanks has to go to David Deakin of the UK Hereford Society for his help in organising the host farms and to our own Eamon Fahy for his hard work in getting this tour off the ground.