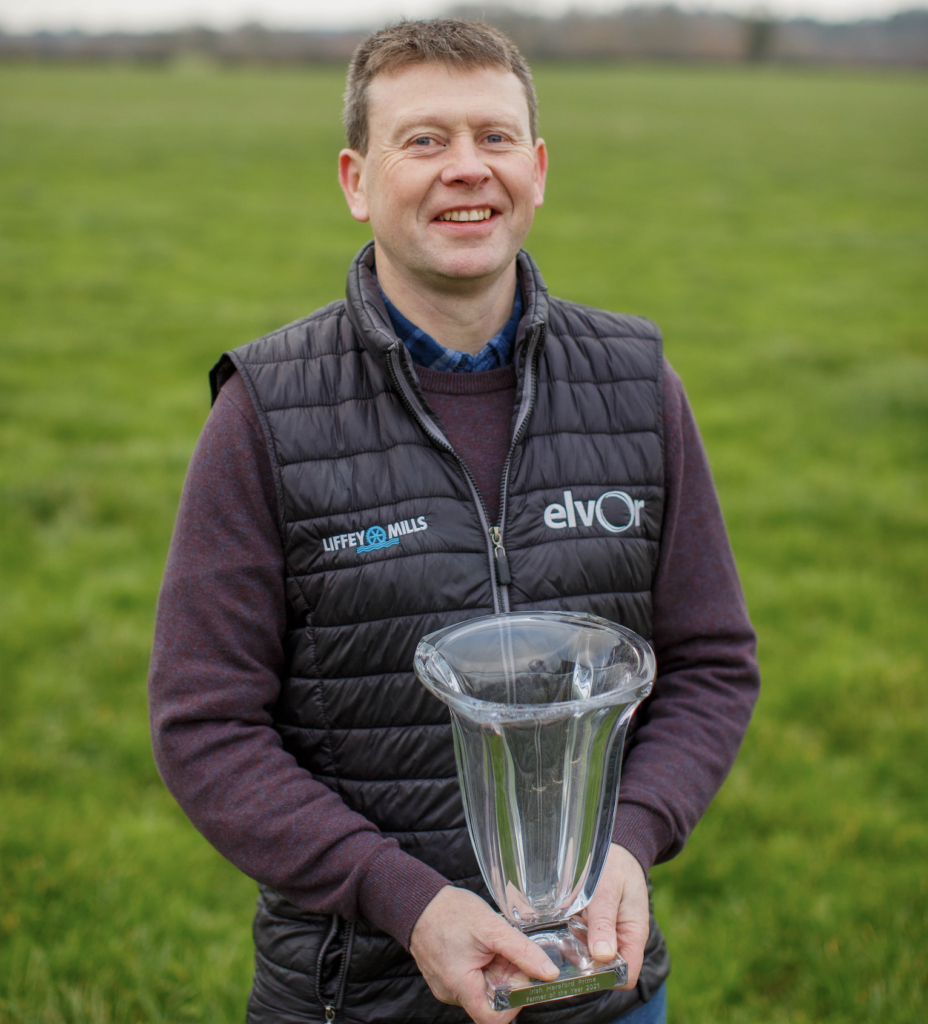 Herefords were a matter of divine intervention for Offaly farmer Clement King. The recently crowned Irish Hereford Prime Farmer of the Year 2021 explains that his son purchased the first Hereford cross calves on the farm with his Holy Communion money and Clement quickly saw they were making as much money as the Charolais suckler calves he had at the time.

“I was sizing up my son’s calves and realised they were doing just as good if not better than mine,” Clement laughs.

Farming with his wife Deidre and two sons Peter and Eoin, who are now in their teens, Clement has gradually pulled back from sucklers and gone full calf-to-beef.

Finished animals are sent to ABP Nenagh and Clement feels that the relationship he’s established with Michael Cleary, Procurement Officer with Irish Hereford Prime and the team there has been invaluable. He credits the support and advice of Irish Hereford Prime with helping him to change system and keep his farm economically sustainable.

“Michael calls out to me here on the farm and liaises with me and you get great feedback,” Clement says. He believes the support and network it creates helps his farm business to thrive and he feels that it has been key to his success.

Clement was chosen as our Irish Hereford Prime’s Farmer of the Year because of his excellent management of both his farm and his livestock.

“Keeping a close eye on cattle in the finishing period allows farmers like Clement, to maximize the number of cattle that will qualify for bonus, this helps our producer group to supply a very consistent product to the end customer,” Michael explained.

“Clement is achieving an impressive weight for age with his cattle and showcases best practice methods in bringing Herefords from farm to fork through excellent use of his grassland and on-farm management.”

Hailing from a dairy farm originally, Clement struck out on his own over 30 years ago and bred Charolais suckler cattle.

However, the temperament and management of Herefords, as well as their easy finishing ability meant he made the switch to Hereford.

“Their temperament is good and so were their kill-outs, I was able to get weight up on them,” Clement says.

He keeps the bulk of the cattle housed for one winter on slats with a lie back area, ensuring they get a good quality silage and ration.  Once they’re turned out to grass, he looks to sell some surplus stock.

Currently, he finishes 20 heifers a year and a handful of steers but is hoping to increase this number as he has fully exited the suckler side of farming to focus on calf to beef.

“I’m finishing the heifers at 18 months, they’re killing out at roughly 280kg and usually grading O= or O+, which qualifies them for the Irish Hereford Prime bonus” he says.

Clement also weighs animals regularly throughout the summer and the winter months and keeps track of their average daily gain (ADG). He finds this an important tool for monitoring the progress of animals.

“The finishing cattle only came in off grass in October and I have them on a high-quality maize mix. I weighed them there at the weekend and I’m very happy with how they’re doing. There are animals there that are making 1.7kg to 2kg ADG,” Clement says.

Clement’s farm is made up of both owned and rented ground, with an emphasis on good grassland management.

“Over the last few years, I’ve reseeded the whole farm and a high level of clover has gone into the farm,” Clement says.

“I grass measure and I believe it’s key in terms of good management but I do find that the new grasses really work well for me also.”

Clement buys 75 Hereford cross calves, both bulls and heifers, every year, as well as keeping steers and heifers for both sale and finishing and says with the numbers he has that reseeding has been vital but advises farmers that establishing clover can be tricky without good management.

He buys calves once a year in spring and sources them from three dairy farmers. He says a good relationship with the farmer you buy calves from is vital and once calves arrive on his farm, they are all vaccinated. He finds that the vaccination program that covers areas such as pneumonia in calves is key to knocking any future health problems on the head and thinks all farmers should consider the advantages of rolling one out on their own farms.

This ensures that high calf health and welfare are maintained and that animals get as few knock backs as possible from disease or other issues. Clement also likes the fact that he can see that calves come from what he calls “good British Friesian” type cows, which he believes gives a better Hereford cross animal.

He attaches a huge importance to early calf management which he feels is vital to ensuring the quality of a finished animal.

“I’m a firm believer that at the young calf stage they need to be on a high (25%) protein milk powder. I use Elvor milk powder and I also give them an 18% ration. It means they’d be about 110kg or above when they’re going out to grass and being weaned. I find that’s a very important stage of the calf’s life,” Clement explains.

Family plays an important role on the farm and even though both of Clement’s sons are involved in Offaly GAA, they still find the time to help out which is something he appreciates.

“I have an off-farm job with Liffey Mills and I’d come home in the evening and the lads would have the calves fed before heading off to hurling training. It’s great to see the interest that they have,”

Clement says, while adding that the GAA is part of the lifeblood of the family and something they all love to be part of in their spare time.