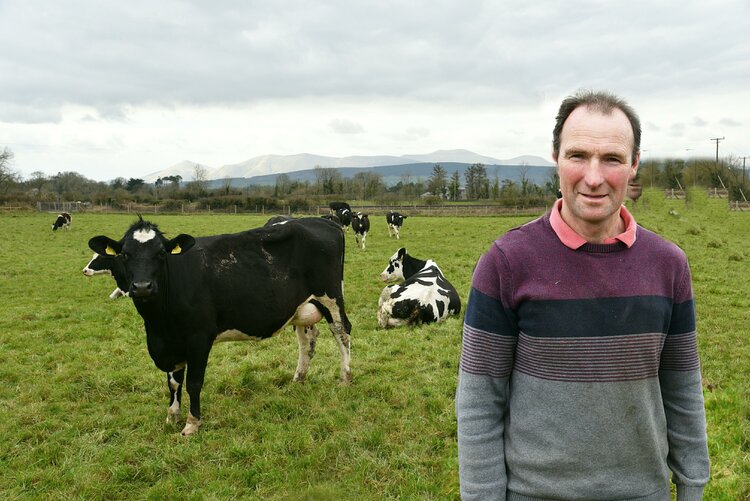 The decision to breed his entire dairy herd to Hereford bulls is delivering benefits that Tipperary farmer Shane Hourigan could not have anticipated when he opted for the traditional beef breed.

While many dairy farmers are struggling to cope with the absence of calf sales through the marts due to the Covid-19 restrictions, Shane says his Hereford cross calves are sold before they are born.

“I am benefiting from the strong demand from farmers for good Hereford cross calves off the dairy herd, and all the calves are sold off the farm to regular customers every year,”

He says it is a huge advantage this year given that up to a million calves are sold through the marts annually. Shane and his wife Margaret run a 120-cow herd on their farm at Ballinglana, near Cullen, close to theLimerick border.“They are 50/50 Holstein-Friesian and I have gone for a big roomy type of cow that is giving us fine big calves and no calving problems with Hereford,” he says.“Six cows dried off in December, and kept on silage with no concentrates for the winter, sold averaging €913a month ago. They were just short of700kg average, but were not fit for the factory — they could put on a lot more weight.“They are a fine type of cow to use with the Hereford because you have easy calving, and we get a fine sizeof a calf that is up and going very quickly. They are in great demand —there is no problem selling them.

“We are getting mighty calves. We keep them for three weeks before selling off the farm to regular customers who come back year after year.“I have one man who is a regular customer for 15-20 heifers for a suckling herd, and he is finding them very good for milk.“This year the prices are back, but we have been very happy with the prices all along. Last year they averaged €250 for the bulls and €200for heifers. The year before we got €300 for both bulls and heifers. This year we are getting €200 across the board average for both bulls and heifers.”

Although, traditionally, a dairy farm, the dairy herd was dispersed in 2006 and replaced with sucklers.Shane, who also runs a construction business, needed to devote more time to the demand for buildings on and off farms.In 2014, he returned to milk production and the herd has been steadily expanded.Four pedigree Hereford bulls were purchased to run with the herd and three have been retained. Shane paid €3,000 for one and the other two cost €2,800 each.

“We would have been anything but Hereford in the past,” he says.“We had Limousin suckler cows and were crossing with Belgian Blue.There are horses for course and that was ideal for us at that time.“But going to Hereford has proved very suitable for us since going back into milk. We have a docile animal, with a short gestation, fairly good fertility and easy calving with great calves that there is a good market for.“I find that there is greater longevity to the Hereford, and the bulls last longer than many of the continental breeds. The Hereford isa great bull to keep going.”Shane appreciates that it is unusual for a dairy herd not to breed for some replacements. He defends the policy by saying: “It is fine if you get all heifers, but theFriesian bull calf is not worth a lot and that can bring down your average return.“I can buy in replacements from a herd that is better than mine and I can buy in well-bred Friesian heifer calves at the price that I was getting for the Herefords.”Calving usually starts in midFebruary on the Hourigan farm, but was pushed back to the early days ofMarch this year, which has worked out well in a difficult spring. Shane concedes that his approach may not be for everyone, but he is happy with the balance in his herd and he is not for changing back. Shane Hourigan on his Tipperary farm with some of his dairy herd of Holstein-Friesiansbred to Hereford bulls; (below)some of this year’s crop of Hereford cross calves which are being sold on after three weeks. Prices this year have been averaging €200 for both bulls and heifers.

The docile nature of the Hereford breed is “a definite advantage” when using a number of bulls with the herd, according to Shane Hourigan. “I rotate the bulls running with the cows so that I never let two bulls out at the same time,” he says, outlining his management technique when using three or four bulls for mating with the herd.“I haven’t let off two bulls together and I don’t know if it is a good idea or not, but it does give the bulls rest days and I think that is good for them.“I suppose it is not something that many breeders would do, but the three bulls I have on the farm for the last few years are very quiet and I find that it works out very well for me.”The bulls are changed after each milking, with the rotation operating after both the morning and night milkings.“It gives them a rest and it isworking fine for me,” says Shane. “The bulls get so used to it when they come in, they walk up into the shed and welet another bull out. They have got soused to it that they don’t expect to be going back out again.”When the bulls were young, he used four bulls for the herd of 120 cows.Currently three pedigree Hereford bulls are used for the whole herd including Astonpoll 1 Dan