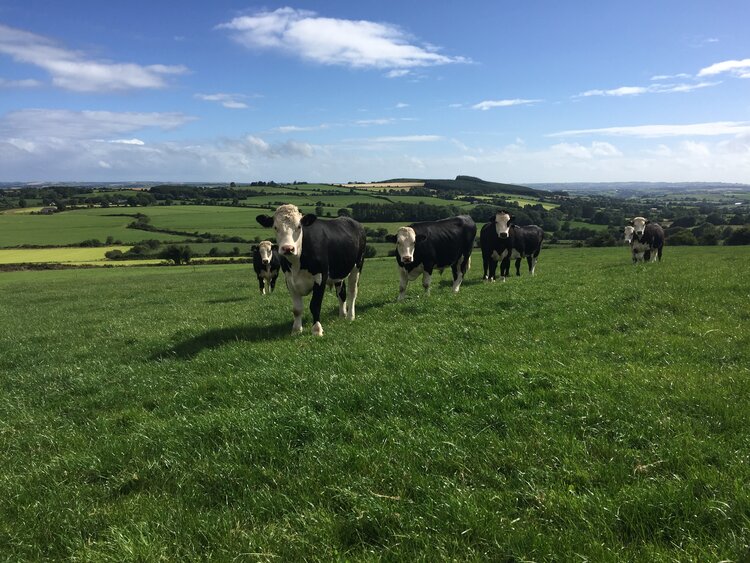 Irish Hereford Prime held its inaugural Farmer of the Year competition in late summer of 2017.

There were 20 finalists spread across the country, from Cork to Monaghan. When it came to the final decision a drystock farmer called Vincent Foley from Innishannon County Cork was awarded this new title. On day 2 of the National Ploughing Championships rugby legend John Hayes who is ambassador for Irish Hereford Prime presented this award to Vincent who was accompanied by some of his family including a number of his grandchildren.

Vincent retired from dairying 15 years ago and always had a Hereford bull up until then. Upon retiring he began buying stores and finishing them on a grass based system. It is of no surprise that more than half of these stores are black white heads as Vincent likes Hereford cross cattle for their ease of management/docility and quicker turnover or throughput.

Vincent puts huge emphasis on his grass based system both on quality and quantity with the operation of a paddock system that sees the farm stocked at over 2.5 LU per Hectare. Reseeding is carried out on 10% of the farm each year by traditional ploughing method. Vincent places emphasis on making high quality silage too. Silage with a DMD Level of 74% being the norm.

There has been no meal fed on Vincent’s farm for many years at this stage. All steers are slaughtered between 25 and 28 months of age. Vincent has been a supplier of cattle to ABP Bandon “since it opened”! He has been an Irish Hereford Prime member for more than 10 years now.

Vincent’s outlook on farming is positive. He pointed out how food is needed for an ever-increasing population and therefor farmers will be wanted!